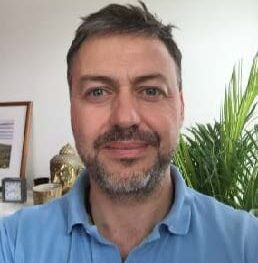 Michel-Pierre Morin qualified from the ESO in 2000, developed and ran a successful practice in New-Zealand for 7 years before moving back to France. He has since developed another practice alongside his wife in a pluri-disciplinary clinic.

Michel-Pierre taught structural and cranial osteopathic techniques, as well as clinical skills, in a French school from 2008 to 2016. The application of osteopathic principles in the care of pathological patient has remained his interest from the time he was a student. He has shared his teaching experience with the students of Maidstone’s international programme since 2012.

Michel-Pierre has practiced Iyengar yoga since 2001, and completed a diplôma in Naturopathy in 2013.